Sri Ganapathy Homam on Maha Sangada Hara Chathurthi Day on 5th day of August,2012 was performed in a grand manner at the temple of Kaaria Siddhi Vinayagar. A team of eight shastrigal led by Sri Raghava Shastry of Tiruvallur commenced the Homam at 8.30 a.m. Sri Ganapathy Moola Manthram was chanted 1008 times by the eight priests.  The attending devotees also chanted the Moola manthram and hence the number of chantings far exceeded the 8000 mark aimed by the performing priests.

All the offerings were totally consumed by the Homa Agni .The fact that Lord Gajamughan was entirely pleased with the Homam was conveyed by the pattern left by the basmam ( ashes ) inside the Homa Gundam. The pattern was that of an elephant. Everybody was thrilled by  this sight !!

In the morning an ahhishekam was performed to ARULMIGHU ASHTABUJA VISHNU DURGAI
(அருள்மிகு அஷ்டபுஜ விஷ்ணு துர்க்கை). While the Ganapathy Homam was being performed , another group of devotees chanted Sri Lalitha Saharanama Sthothram followed by a Sahasranama Archanai at the adjoining Durgai Sannadhi. The whole area was filled with a divine aura.

Prior to Poornaahuthi, Sri Raghava Shastrigal explained the sanctity of the Homam and the benefits that will accrue to the participants. Hundreds of devotees participated In the Maha Homam by paying the Sangalpa Kattanam.

Kozhukattai, Sarkkarai Pangal, Venn Pongal, Sundal , Medhu vadai, Puliyodharai and Suddha Annam were offered as neivedhyam to the deities and this prasadham was distributed to the devotees attending the Homam. 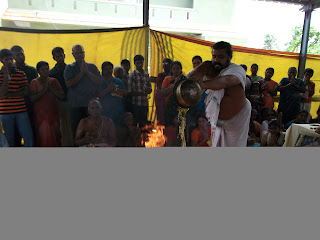 Posted by panchamukha-tiruvallur at 11:19 PM